The wife of U.S. Rep. Duncan Hunter pleaded guilty Thursday to a single corruption count and agreed to testify against her husband at his trial on charges the couple spent more than $200,000 in campaign funds on trips, dinners, clothes and other personal expenses.

Margaret Hunter served as campaign chair for her husband, and after the couple was indicted last year the Republican congressman from California suggested his wife was to blame for any misuse of funds.

They both pleaded not guilty but she reversed course and withdrew her plea during a brief federal court hearing. She accepted a plea deal that will see 59 charges dismissed in exchange for her testimony, full cooperation with prosecutors and other concessions.

The single conspiracy charge to which she pleaded includes all the allegations contained in the 60-count indictment.

In a statement read by her attorney after accepting the agreement that could send her to prison for up to five years, Margaret Hunter said she accepts full responsibility for her actions.

“I am deeply remorseful, and I apologize,” she said.

Prosecutors allege the couple engaged in more than 30 illegal transactions totaling more than $200,000 between 2010 and 2016. The spending included money for trips to Italy, Hawaii and Las Vegas and expensive dinners, as well as more mundane items like shirts and family groceries. 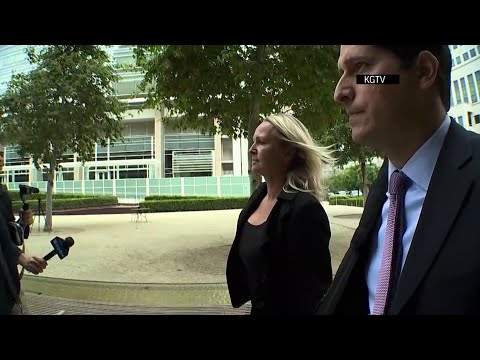 The improper spending occurred when the couple knew their household budget was in tatters and they were being charged tens of thousands of dollars for overdrafts and credit card fees, authorities said.

Duncan Hunter said in a statement emailed to The Associated Press that he’s been politically targeted by federal prosecutors. The congressman, a close ally of President Donald Trump, said after he was indicted that the Justice Department was “the Democrats’ arm of law enforcement.”

He said Thursday that the case should have been handled by the Federal Elections Commission and alleged U.S. prosecutors indicted him and his wife ahead of the November 2018 election “to inflict as much political damage as possible in hopes of picking up a congressional seat.”

Hunter, a Marine combat veteran, was one of two Republican members of Congress to win re-election last year after being indicted. The other is New York Rep. Chris Collins, who is charged with insider trading.

Hunter’s trial is scheduled for Sept. 10, one week before his wife’s sentencing.

Since the indictment, the younger Hunter and his wife have entered U.S. court in San Diego separately with their own attorneys and also left separately. Rep. Hunter did not attend his wife’s hearing Thursday.

The plea agreement describes a couple perpetually in debt and living paycheck to paycheck. It says Duncan Hunter’s chief of staff and campaign treasurer repeatedly warned that it was improper to use campaign cash for personal expenses.

To try to hide vacations funded by campaign cash, prosecutors said Hunter would schedule meetings or events that supposedly were campaign-related but sometimes never occurred.

The plea agreement detailed how the couple used the campaign’s credit cards. Among the expenses: $399 for zip lining for Hunter and two of his children; $500 in airline travel expenses for their pet bunny, Eggburt; and $351 for a family lunch in connection with a child’s Irish dance competition.

They also are accused of trying to conceal the illegal spending in federal campaign finance reports. Duncan Hunter’s lawyers said in 2017 that the couple repaid the campaign about $60,000.

Prosecutors say the conspiracy was set up in such a way that Hunter and his wife could spend money without having to inform the other what it was for. Hunter’s wife hid certain purchases “for items like school lunches” while Hunter concealed from her spending to “facilitate certain personal relationships with others.”

That is an apparent veiled reference to alleged infidelities Hunter’s lawyer, Gregory Vega, alluded to in an August letter to the Justice Department urging prosecutors to delay any action until after the election. He wrote that “while there may be evidence of infidelity, irresponsibility, or alcohol dependence, the underlying facts do not equate to criminal activity.”

The Hunter family is a household name in a district that covers inland areas of San Diego County and a small slice of Riverside County. His father, also named Duncan, served nearly three decades in what now is the most heavily Republican congressional districts in Southern California.

In an interview with Fox News last year, the six-term congressman said his campaign made mistakes, that he gave his wife power of attorney when he deployed as a Marine to Iraq in 2003, and that she handled his finances during his first five terms in office.

Former U.S. prosecutor Jason A. Forge said it’s rare for one spouse to plead out when the other’s case has not been resolved. Her cooperation and testimony could significantly strengthen an already strong case, he said.

Forge prosecuted California Rep. Randy “Duke” Cunningham, who resigned from Congress in 2005 and served more than seven years in prison for one of the largest bribery scandals in recent history.

You may have missed